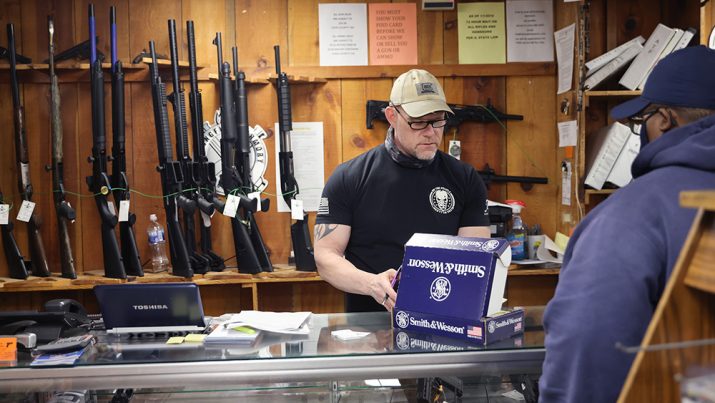 Officials in the “free state” of Florida are moving to bar the tracking of gun and ammunition purchases because they say such information isn’t relevant to anything except to provide it to the government at some point, which is unnecessary and none of Uncle Sam’s business.

The move would block state financial institutions from implementing firearms and ammunition sales tracking codes, with officials arguing that doing so amounts to an unconstitutional infringement on the Second Amendment.

The three state officials, all of who are, unsurprisingly, Republicans, touted the “Florida Arms and Ammo Act,” a first-in-the-country policy proposal to ban the tracking of sales of guns and ammo through merchant category codes.

The proposal was introduced by Florida Commissioner of Agriculture Wilton Simpson, along with state Sen. Danny Burgess and state Rep. John Snyder, who argued that the codes would create something of a gun and ammunition registry for Florida residents, The Epoch Times reported this week.

“We are all blessed to live in the free state of Florida where our Second Amendment rights are valued and protected, but Democrats in Washington continue to try to chip away at these rights—and we must stay vigilant,”  Simpson, a former state Senate president who was sworn in recently as the state’s agriculture commissioner, noted in a statement.

Gun-control advocates and Democrat lawmakers pushed for the International Organization for Standardization (ISO) to recently adopt new merchant category codes that can be used to identify retail sales of firearms and ammunition when made by credit card.

A coalition of national gun-control groups, including Guns Down America, Giffords, Brady, and New Yorkers Against Gun Violence, issued a joint statement applauding the new tracking codes when the ISO approved their creation in September 2022.

The groups said that the decision “paves the way for credit card companies to help law enforcement preempt mass shootings and firearm trafficking by identifying suspicious patterns of firearms and ammunition purchases” via the merchant codes for some 9,000 federally licensed firearms dealers in the United States.

At the same time, major credit card companies have agreed to implement the codes, with liberty-stealing authoritarian Democrats in Congress praising the decision in a letter to American Express, Mastercard, and Visa.

“This sensible decision also reflects a commitment to prevent gun violence and the unnecessary loss of life,” reads the Oct. 20, 2022, letter, signed by 118 Dems in total, without a single Republican member signing on.

In addition to Florida, 23 other state attorneys general have contacted the credit card companies and have asked them not to track gun and ammo purchases.

“First, efforts to track and monitor sales at gun stores would only result in vague and misleading information. This categorization would not recognize the difference, for example, between the purchase of a gun safe and a firearm,” they noted in a letter to the companies in September.

The codes also would not accurately capture gun sales at some department stores, which would result in “arbitrarily disparate treatment” targeting sellers and buyers at gun stores.

“More importantly, purposefully tracking this information can only result in its misuse, either unintentional or deliberate,” the attorneys general wrote.

The state AGs went on to note that tracking such information “only matters if your institutions are considering using that information to take further, harmful action—like infringing upon consumer privacy, inhibiting constitutionally protected purchases by selectively restricting the use of your payment systems, or otherwise withholding your financial services from targeted ‘disfavored’ merchants.”

“The Second Amendment is a fundamental right, but it’s also a fundamental American value. Our financial institutions should stop lending their market power to those who wish to attack that value,” they wrote, adding they are prepared to go to court, if need be, “to protect our citizens and consumers from unlawful attempts to undermine their constitutional rights.”