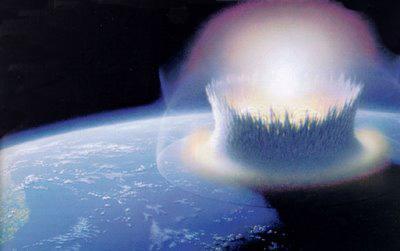 It remains an undeniable fact that the world’s climate is constantly changing. And the Comet Research Group makes a case for the worst cataclysmic changes from the past having absolutely nothing to do with human activity.

The group put together a library of research about what its members called the Younger Dryas climate episode, which is said to have involved a comet that struck the earth 12,800 years ago. That impact resulted in widespread destruction and major changes to the climate, as well as the creation of diamonds, a mysterious “black mat,” and other interesting things that archaeologists and researchers have since uncovered and studied.

There were actually three major events that occurred around that time, according to the group, that resulted in a sudden return of Ice Age-like temperatures. And believe it or not, these events did not result from humans eating meat and driving gas-powered vehicles.

“Temperatures plunged 10 degrees Celsius (18 degrees Fahrenheit) and stayed low for about 1,400 years,” the group explains. “That abrupt change is called the Younger Dryas (YD) climate episode. It is the most unusual cooling event in about two million years.”

That series of events resulted in widespread death and the extinction of the many large animals, according to the group – this event has since been dubbed a “megafauna.”

Human population levels also plunged at the same time for the very same reason, the group says. As much as 60 percent of the world’s total population disappeared, and so did the cultures and civilizations that lived during that time.

The climate has been changing forever, and mankind has no real control over it

The extinction events that encompass the Younger Dryas impact also generated and released tons and tons of melted spherules and glass while blasting the atmosphere with soot and dust. These particulates were far more damaging than exhaust releases from today’s industries, by the way – and humans had no control over any of it.

No amount of carbon taxes or “green” energy could have stopped what befell the world at that time, nor could the climate from prior have been saved into its aftermath. Everything that is said to have occurred was completely outside of human control, in other words.

Much of this is addressed in the highly controversial “Ancient Apocalypse” series on Netflix, which climate lunatics are fighting tooth and nail to stop from being streamed because it blasts away their narrative.

What the series suggests is that major climate events have occurred all throughout history that decimated even the most advanced civilizations. Even if there were no more pollution or emissions, to put it another way, those climate events still would have occurred regardless.

The Comet Research Group has put together a PDF collection containing nine works that tell the story of the Younger Dryas:

One of the major points of such information with regard to climate change is that human interventions that claim to want to stop it are pointless endeavors that will not work. Turning the world “green” and stealing everyone’s liberty and freedom will not stop a major climate-changing event from occurring, no matter how much “plant-based” food you consume and how many Teslas you buy.

More related news about the climate can be found at Climate.news.